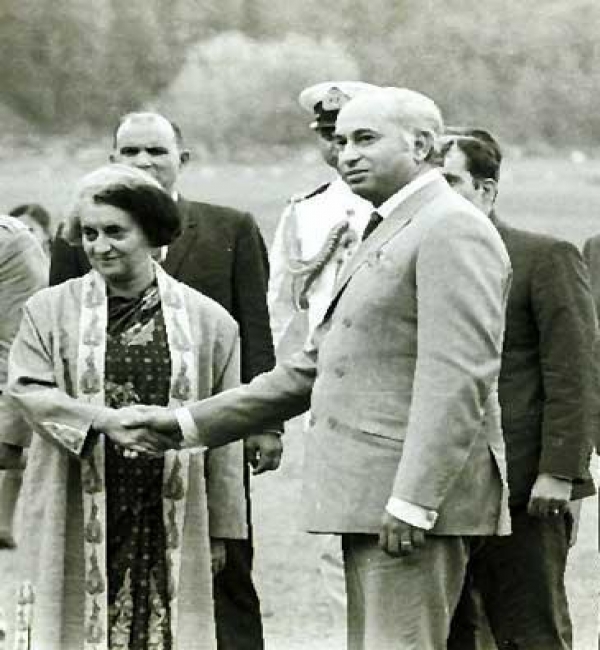 In his 1978 memoirs, President Nixon claimed, â€œBy using diplomatic signals and behind-the-scenes pressures we had been able to save West Pakistan from the imminent threat of Indian aggression and domination. We had also once again avoided a major confrontation with the Soviet Union.â€[1] Kissingerâ€™s far more detailed chapter on â€œthe tilt,â€ in the first volume of his memoirs, White House Years, complements and largely corroborates Nixonâ€™s. Kissinger argued that Nixon did not want to â€œsqueeze Yahyaâ€ and tried to put forward a neutral posture to the bloodshed in East Pakistan so as not to encourage secessionist elements within an ally, Pakistan, which was divided into two wings over 1,000 miles apart astride India.[2] Above all, before his secret trip to China in July 1971, Kissinger wanted to preserve the special channel to the P.R.C., and he saw three obstacles to handling the situation in South Asia: â€œthe policy of India, our own public debate, and the indiscipline of our bureaucracy.â€ Kissinger stressed that the U.S. attempted to restrain India by making clear American opposition to Indo-Pakistani conflict and attempting to force the Soviet Union to control their ally, India. Nevertheless, the two South Asian countries marched towards conflict following a string of natural disasters in East Pakistanâ€”later the independent nation of Bangladesh, an election loss for Pakistan President Yahya Khan to Mujib Rahman, and Yahyaâ€™s subsequent crackdown in East Pakistan against Bangladeshi independence. [1] Nixon, RN, p.530. [2] Nixon famously wrote by hand on a memo of April 28, 1971, on â€œPolicy Options Towards Pakistan: â€œTo all hands. Donâ€™t squeeze Yahya at this time.â€ Aijazuddin correctly notes that the language did not originate with the President, but actually with Alexander Haig, who wrote in a cover memo, â€œHenry has suggestedâ€¦you could include a note to the effect that you want no actions taken at this time which would squeeze West Pakistan.â€ The cover memo is in Aijazuddin, The White House and Pakistan, p.241. The longer memo from Kissinger to the President in Ibid, pp.242â€“247; and FRUS, IX, pp.94â€“98.

Luke A. Nichter is an Assistant Professor of History at Texas A&M University-Central Texas. He received his Ph.D. in History from Bowling Green State University, whereÂ his dissertation was entitledÂ Richard Nixon and Europe: Confrontation and Cooperation, 1969-1974.Â This manuscript is currently undergoing revision for publication. AlsoÂ a co-editor ofÂ nixontapes.org, Nichter created the siteÂ in July 2007 in orderÂ that the public and researchers could finally have access to aÂ complete, user-friendly,Â digitized collection of the Nixon tapes.

Richard A. Moss, Ph.D. is a co-editor at nixontapes.org and works as a government consultant in the Washington D.C. metro area. He defended his doctoral dissertation, Behind the Backchannel: Achieving DÃ©tente in U.S.-Soviet relations, 1969-1972, at The George Washington University in 2009. His dissertation makes extensive use of never-before-published Nixon tapes, in addition to recently declassified U.S. and Russian materials. From August 2007 to June 2009, Moss served as the State Departmentâ€™s resident Nixon tapes expert. Moss overhauled the quality control system and transcribed or reviewed over 2000 pages of transcripts for over 30 published and forthcomingÂ Foreign Relations of the United States (FRUS)Â volumes.